In 2014, the Oklahoma City MSA ranked 48th among the nation’s 50 largest metropolitan areas for health and fitness according to the American Fitness Index. In 2014, the city’s obesity rate was 32.6%, and only 48.1% of the population was in “very good” or “excellent” health. Death rates from cardiovascular disease and diabetes were substantially above average.

We don’t know all the causes of the nation’s major increase in the percentage of people who are overweight or obese and the many health problems that result. But the design of the built environment is one factor that directly affects the physical and mental health of the community. The distances that we must travel and a lack of features that encourage people to walk, bike, or use transit makes it harder for us to incorporate physical activity into our normal routines.

In Oklahoma City, obesity rates and death rates from cardiovascular disease and diabetes are significantly above average for metropolitan areas, while healthy lifestyle indicators like physical activity, use of active transportation, and consumption of fruits and vegetables are substantially below average. In 2013, the American Fitness Index rated our city 49th in personal fitness and 40th in community indicators among the nation’s 50 largest metropolitan areas.

We are challenged with designing our neighborhoods, commercial centers, and streets to be places where children can play outside and walk to school, and where households have the option to travel to work, shopping, entertainment, and other destinations by walking, biking, or transit. 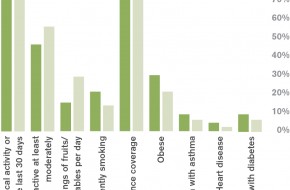 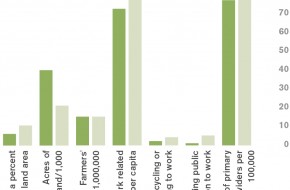