The housing market is a vital component in the growth and development of a city. With this in mind, the City completed a Housing Market Preference and Demand Study in 2013 to help determine whether and to what extent the market for housing might change over the next several years. The study, which included a survey of area households, found that both urban and suburban housing demand is strongly influenced by a few key neighborhood characteristics. Additionally, there is demand pressure towards nearby suburban communities which may cause continued out-migration of households and resources if urban neighborhood improvements are deemed inadequate.

There are a few characteristics, primarily associated with location or neighborhood as opposed to the residence itself, that households in Oklahoma City find particularly important when deciding where to look for a place to live:

The above characteristics, which impact demand, result in several key findings about household demand in Oklahoma City:

The City can take action to increase demand for the central areas of the city by building on existing assets. The following recommendations are tailored to the preferences expressed by Oklahoma City households and will have the greatest impact on the economic, social, and fiscal profile of the city, especially for the emerging generation of home buyers. (Those born between 1982-1999 account for 30% of the OKC metro population.) 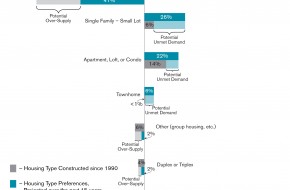 Potential Imbalance Between Housing Supply and Housing Demand
Demand for a more diverse supply of housing stock appears to be increasing in Oklahoma City. As the market matures, the gaps, shown as over-supply and unmet demand on this chart, will close. 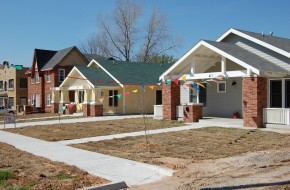