The Employment Land Needs Assessment & Action Plan (ELNAAP) was completed prior to planokc in response to Oklahoma City’s insufficient supply of large, served industrial and office sites. The goal of the study, which was produced by the City and several partner organizations including the Greater Oklahoma City Chamber of Commerce and the Alliance for Economic Development, was to provide ample opportunity for local companies to expand and for new companies to locate in Oklahoma City. The study compared the demand for and supply of large, served, well-located sites and made recommendations to ensure a consistent supply.

Oklahoma City has a substantial amount of land within its boundaries; however, relatively little land that is appropriate for industrial or office use is also serviced and consolidated into large sites of 50 to 500 acres. The scarcity of these large sites, which are needed to support new and expanding businesses, has hindered the City’s ability to attract new companies. Obstacles affecting the supply of development-ready land include:

The historical and expected absorption of industrial/business park land in the region averages 80 acres per year. In any given year, however, the absorption has been and could be several times the average. To provide reasonable choice to the market, there should be an inventory of development-ready sites several times larger than the average annual absorption. These sites should be of various sizes (25, 50, 100, 500 acres) and in different areas within the city. A perpetual inventory of 1,000 acres of development-ready land would provide for most opportunities.

The ELNAAP made numerous recommendations, the most important of which are summarized below:

Many of the recommendations above will be jointly pursued by the City and partner agencies such as the Alliance for Economic Development and the Greater Oklahoma City Chamber of Commerce. The Planning Commission and City Council can make an important contribution to our economic future by adhering to the intent of the ELNAAP as expressed in planokc’s land use plan. Consistent preservation of Employment Reserve areas and funding for infrastructure to serve them will facilitate economic growth for decades to come. 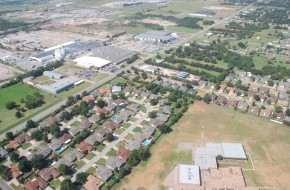 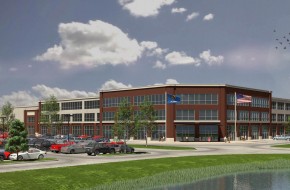 Rendering of the Kimray, Inc campus to be built in an Employment Reserve area
X