Why & How / Why Plan Now? / Issues / Issue Focus 4: Neighborhood Health

Housing deterioration and long-term vacancy negatively affect many aspects of community life, from individual health to safety to educational attainment.

Deteriorated homes, abandoned buildings, and empty lots create gaps in the fabric and civic life of many Oklahoma City neighborhoods. These gaps create hot spots for crime that threaten the health and safety of residents. A 2013 study (Addressing Vacant & Abandoned Buildings in Oklahoma City: Prevalence, Costs & Program Proposal) found that there are over 12,000 buildings that have been vacant for six months or longer within the city boundaries.

Causes of these neighborhood issues in Oklahoma City include relatively low land values, dispersion of population, brownfield sites, obsolete housing types, and commercial spread and deterioration. The character and appearance of neighborhoods also has a strong influence on property values and ability to attract prospective residents.

The Oklahoma City Community Appearance Survey found that younger households were particularly sensitive to urban character, showing “a strong preference for pedestrian oriented developments. . . Overall survey results suggest that there are some design attributes that are universally accepted as desirable, such as quality landscaping and trees, sidewalks and other pedestrian-oriented amenities, an overwhelming value of safety and security as well as privacy, and an aversion to front-facing garages within residential developments.” 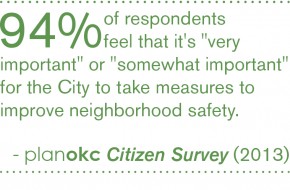 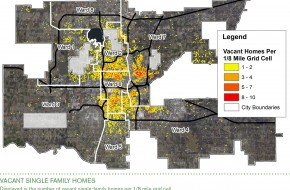 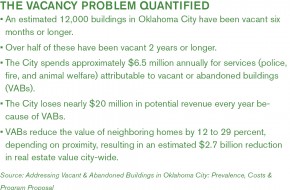 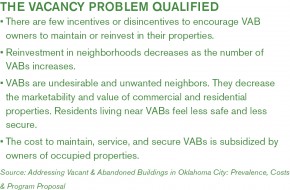