Base Land Use Typology Areas

The core Land Use Typology Areas (LUTAs) are oriented around a spectrum of development intensities – from undeveloped Open Space, to the high intensity of Downtown. Each encompasses development patterns designed to encourage connectivity and compatibility as appropriate to the intended level of intensity. Base LUTAs are listed below in order of intensity from lowest to highest.

“Layer” Typology Areas are content-specific designations that adjust the purpose and function of the base LUTAs. The variations from the base LUTAs differ. Agricultural Preserve, Urban Reserve, and Heavy Industrial narrow the range of land uses or densities to avoid incompatible land use patterns. Regional Districts and Employment Reserve encourage retail and industrial/employment uses in targeted areas, while Urban Commercial and Transit-Oriented districts encourage higher levels of intensity and connectivity.

Concentrations of publicly owned land that are intended to remain undeveloped and natural in character. Certain public uses may be appropriate.

Large-lot residential (5 acres or more) plus related commercial services. No expectation of urbanization or provision of urban infrastructure such as water or sewer.

Large-lot residential (2 acres or more) plus related commercial services. No expectation of urbanization or provision of water or sewer.

Applies to the area surrounding the central business district. Developments are expected to have notably higher densities, scale, and mixture of uses than those found in UM.

The city center, Oklahoma City’s most intense development area, envisioned as a regional center for commerce and tourism.

Reserves agricultural land and large acreage estates until the area is ready for urbanization. Maintains land to provide the most flexibility for future urban development and the ability to efficiently and sustainably deliver services.

Encourages the concentration of small-scale retail, office, and service businesses in locations that serve as hubs for neighborhood and city-wide consumer activity.

Designates areas that strategically prioritize the location and concentration of regionally serving retail and entertainment uses.

Intended to accommodate industrial uses that are difficult to integrate with less intense uses due to negative impacts from heavy traffic, noise, or odors. 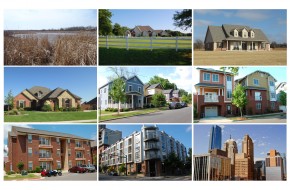 Land Use Intensity
The planokc Land Use Plan is designed to accommodate the wide variety of land use intensities found within Oklahoma City. The Land Use Plan applies appropriate ranges of intensity to each area of the city to establish a wide range of development options. 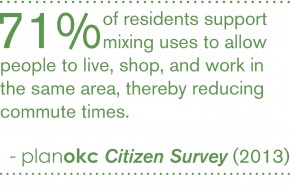 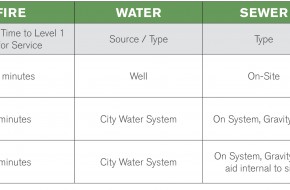